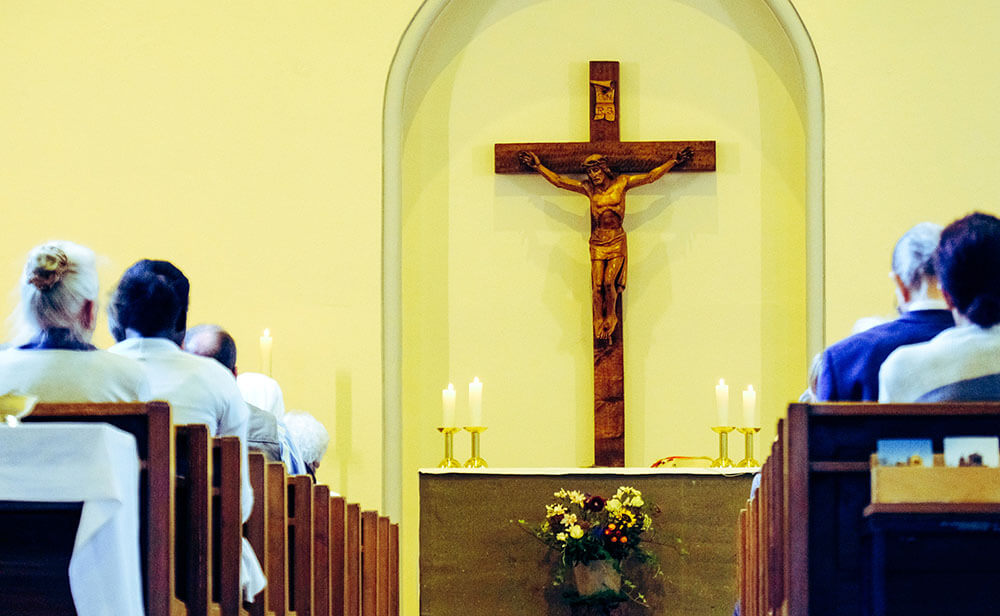 No Comments on ‘A small but important step’Posted in Uncategorized By Greg JonasPosted on April 7, 2017September 29, 2020

Local Catholic diocese reaches out to the LGBT community

On Saturday, Oct. 7, I attended a Mass for the members of the LGBT community and their families at St. John the Evangelist Roman Catholic Church in Hillcrest.

The Mass was celebrated by Auxiliary Bishop John Dolan and observed the 20th anniversary of “Always Our Children” — a pastoral document from the U.S. Catholic bishops to parents and pastors of LGBT children — released Sept. 10, 1997.

The invitation to participate came from the Roman Catholic Diocese of San Diego’s Office for Liturgy and Spirituality, on behalf of Robert McElroy, Bishop of the Roman Catholic Diocese of San Diegodiocese, who was also in attendance. McElroy is very progressive and had “requested” that St. John’s reach out to the LGBT community, since the parish is located in Hillcrest.

Being gay and Catholic has always been a challenge for many. It’s tough enough when family and friends isolate someone who is gay, but not being accepted by one’s faith community adds another layer to that isolation. With this in mind, I was curious; would this Mass address the challenges between the Catholic Church and our community?

My own personal experiences with the Catholic Church go back many years. I attended Catholic high school and college and was a member of a religious community for 17 years. I taught languages and religion in several Catholic high schools. I first became involved with Dignity San Diego — a faith community for LGBT Catholics and their allies — in the late 1980s, serving as chapter president from 2001–2003.

While chapter president, I confronted the local bishop and asked him to not vote to blame the sexual abuse scandal on homosexual priests at an upcoming bishops’ conference — and he did not. I felt this exchange might have been an opening for dialog, but it wasn’t.

Shortly thereafter, he refused to allow for a Catholic funeral for two members of our community; and, when San Diego Pride asked Dignity if a priest would be available to provide a blessing for same-sex couples during the festival — and we provided one — both the priest and I found ourselves designated as “persona non grata” by the bishop. When funerals of LGBT community members were denied, I left Dignity and began attending St. Paul’s Cathedral.

With isolation running so deep, I was both curious and skeptical about the upcoming Oct. 7 Mass. I wasn’t sure what to expect.

There were several protesters in the front of the church — members of “Church Militant” — who were praying. They also made their presence felt after Mass, distributing anti-gay material. While the protestor’s presence was peaceful, the large presence of police was both reassuring and unsettling. I discovered later that the bishops and the clergy of St. John’s had received multiple phone and email threats in the weeks prior to the service.

Just walking into St. John’s became an emotional moment. The church was packed with members of the LGBT community; LGBT couples with their children; LGBT youth with their parents; and many allies. Not only were the two bishops present, they were joined by over a dozen priests from the diocese.

I then realized the historic nature of this event: The bishop did not invite the LGBT community to join him for Mass at the cathedral, the bishops and the other priests brought their message to us directly — in our own neighborhood — at St. John the Evangelist Church in Hillcrest.

During his homily, Bishop Dolan spoke of the need of the Catholic Church to reach out to LGBT families — which is the primary message of “Always Our Children.”

At the conclusion of the Mass just prior to the final blessing, McElroy, in his position as Bishop of the Catholic Diocese of San Diego, officially apologized for the treatment of the members of the LGBT community by the church hierarchy.

This was a powerful moment and those present reacted with gratitude, tears and applause. A reception followed and the parishioners couldn’t have been more welcoming.

As we left the church, they handed out a flier. It indicated that St. John’s has an LGBT ministry that celebrates Mass at 6 p.m. on the last Sunday of the month (except for November and December due to holiday). It also offered the following: “In accordance with our parish mission statement, we reach out to provide spiritual nourishment for lesbian, gay, bisexual and transgender people and their families and friends. We seek to affirm the intrinsic value and self-worth of all people and to welcome them into full participation in the faith community. All LGBT people are welcome.

“We also welcome friends and family of LGBT people and anyone who might be questioning what it means to be a supportive Catholic for LGBT parishioners.”

As a result of this Mass, is the church door in the San Diego Diocese closed to LGBT Catholics? No. Are doctrinal issues resolved? No; but it was a small but important step in reconciliation.

For older members of our community, it has been a long journey to this day. I am hopeful that with this opening, healthy dialog will follow so that, in time, each member of our community will feel welcome.

To quote the original pastoral message from 1997: “Though at times you may feel discouraged, hurt, or angry, do not walk away from your families, from the Christian community, from all those who love you. In you God’s love is revealed. You are always our children.”

— Tom Kirkman is a local resident and activist. He can be reached at tkirkman@cox.net.